Brief History of the Codes

The Codes in Action

Watch our short video - "The People Behind the Public Comment Period" 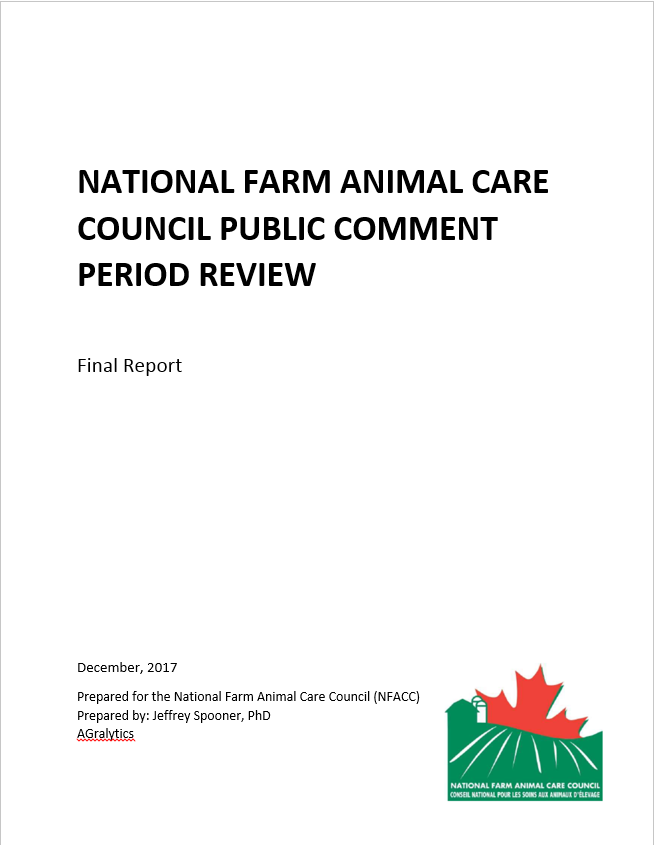 “Harvesting ideas and building consensus through a multi-stakeholder approach is the backbone of our process. The Public Comment Period is a vital component. We encourage participation by anyone with an interest in farm animal care because this ultimately supports a robust process and helps make the Codes the best they can be.” – Jackie Wepruk, General Manager of NFACC

Farm animal care is a critically important part of livestock production. Everyone from farmers to consumers has a valuable role to play – and an important voice to add to the conversation – as new knowledge, opportunities for innovation and the expectations of the marketplace continue to evolve.

This is why public feedback is an essential part of Canada’s process for developing Codes of Practice for the care and handling of farm animals. A well-structured and robust Public Comment Period is crucial to support the quality and success of these standard-setting documents.

The opportunity to participate in the Public Comment Period for each Code is open to all who have an interest in supporting Canada as a leader in farm animal care as part of a well-managed and competitive food system. Your feedback plays a vital role in providing a check and balance to the Code development process and in determining the direction set in the final document.

This Guide to the Public Comment Period provides an overview of this indispensable component of the process and how it supports Code development.

Setting the bar for Canada’s approach to farm animal care

Canada has established Codes of Practice for the care and handling of farm animals that serve as the national understanding of animal care requirements and recommended practices.

In recent years, there has been a major effort undertaken to update these Codes of Practice to better reflect today’s knowledge and expectations.

This process has been led and coordinated by the National Farm Animal Care Council (NFACC), which represents and involves a broad range of stakeholder groups including farm animal industries, animal welfare organizations, retail and food service, the veterinary community, government and other allied groups with an interest in farm animal care. Learn more about the Codes of Practice and NFACC at www.nfacc.ca/codes-of-practice.

Is my viewpoint heard and do I have an influence?

This is arguably the most important question for anyone who chooses to participate in the Public Comment Period process. The answer is an emphatic “Yes”.

No-one knows this better than the individuals who have served as Code Secretaries on each of the Code Development Committees that have been formed to carry out the development of the updated Codes of Practice.

It is the Code Secretaries who are charged with receiving all of the feedback from the Public Comment Period and organizing and providing this to the Committee members they facilitate. Here is a small sampling of their comments on this process:

“All of the comments we received were handled very carefully to make sure they were considered as part of the process. In the case of a Code with lots of feedback, such as the Pig Code, this involved a lot of painstaking work to organize, including categorizing and sub-categorizing the comments so they could be accessed and reviewed by the committee as efficiently as possible. Our commitment was to make sure all of the comments were considered as part of the process and I can unequivocally say that is what happened.” – Betsy Sharples, pig Code Secretary

“Committee members were very pleased with the diversity of people who provided input and how that enhanced the final Codes.” – Nadine Meade, Secretary for three different Codes, Code secretary for mink, farmed fox and sheep Codes

“One of the aspects that impressed me was the care taken by committee members to make sure all viewpoints from the comment period were heard and carefully considered.” – Allison Taylor, beef cattle Code Secretary

“We considered and used a range of options to best organize the feedback. Committee members came to their meetings having reviewed this information and ready to discuss. All comments had a role in the final review and revision process.” – Caroline Ramsay, equine Code Secretary

Measures are in place to protect the privacy of both individuals and organizations who submit information as part of the Public Comment Period.

“As an individual, when you submit information you are required to enter your name and email address,” says Mikki Shatosky, NFACC Project Assistant. “This helps ensure the integrity of the information. It also provides us with a way to contact the person providing the feedback if there is a question about their submission. However, names and email addresses are kept in confidence.” They are not provided to the Code Development Committee or shared publicly.

The pathway toward a newly updated Code of Practice includes a number of important milestones (See Road to the Codes), with the Public Comment Period playing a crucial role in ensuring a workable and effective approach before each new Code is finalized and implemented.

Here’s a breakdown of the key steps related to this Public Comment Period:

A majority of the Code development process centers on the various stakeholders who make up the Code Development Committee working together to develop a draft document. Once this critical achievement is realized, the focus turns to organizing and delivering the Public Comment Period.

To support a process that is both manageable and timely, the length of the Public Comment Period is set at 60 days for each Code. The aim is for this period to begin soon after a draft Code is developed, to support an efficient Code development process.

Communication is critical at every stage of Code development to keep stakeholders informed and support good process. This includes a multi-component communication effort to support awareness of the Public Comment Period and encourage participation, led by a joint announcement from NFACC and the industry group that initiated the Code development or update process.

Once the Public Comment Period begins, those who wish to participate have the opportunity to review the draft Code of Practice and submit their comments.

The draft Code is made available on the NFACC website, at www.nfacc.ca, which also includes an electronic format participants can use to enter and submit their comments. Typically, industry organizations such as producer associations, as well as organizations representing other interest groups, provide links to this online system through their own websites and some also offer assistance with submitting comments. This approach allows for a consistent approach across different Codes. It also allows effective and secure collection and storage of comments for easy access in a consistent platform.  Overall it supports the quality of the process and the fulsome consideration of the comments made.

Step 4: Feedback is organized and provided to Committee

The comments received through the NFACC website are then provided to the secretary of the Code Development Committee. The secretary is charged with organizing and providing this information to the Committee in a manner that is most effective. Code Secretaries organized information in a logical format, based on considerations such as the volume of comments and what made sense for the Committee members they are supporting.

Effort is made to provide the information in a timely fashion following the completion of the Public Comment Period, with the specific timing varying somewhat depending largely on the volume of information the Code Secretary is required to manage.

The comments are provided to Committee members in a manner that allows each member to review on their own before discussing as a full Committee.

A date is also determined for a full Committee meeting to discuss the feedback received and determine any changes needed to the Code as a result. The length and number of meetings required depends on how quickly consensus is reached on each of the issues raised by the Public Comment Period feedback. Typically one or two multi-day sessions are required. However, in the case of the Pig Code, for example, which received far more submissions than any other Code process to date, three two-day meetings and multiple teleconferences with smaller sub-committees between meetings were required.

Once consensus is reached, arrangements are made to revise and finalize the Code as needed before the Code Development process is fully completed.

Road to the Codes

The development of updated Codes follow specific stages that are designed to make the process transparent, collaborative, science and consensus-based, and participative. A brief snapshot of the major components includes these steps:

Get more detailed information on this process at www.nfacc.ca/code-development-process.

A common thread throughout all aspects of the Code Development Process, including the Public Comment Period, is the principle of continual improvement. Canada has set a unique path that is based on pursuing this goal through the multi-stakeholder, consensus-based approach that is led and coordinated through NFACC.

“Bringing different groups around the same table and working together to achieve consensus is no small feat and often represents a substantial challenge,” says Edouard Asnong, a Pike River, Québec, hog farmer and chair of NFACC. “However this has also been recognized as a major strength. It supports the development of Codes that not only first and foremost ensure the responsible care and good welfare of farm animals, but also accomplishes this in a balanced way that is workable and acceptable to a broad and diverse range of stakeholders.

“But it’s one thing to debate and find consensus within the room. We also need to encourage dialogue and input more broadly at the public level. This is why the Public Comment Period has been, and will continue to be, a critically important part of the process for Code development.”

The needs and discussion around farm animal care will continue to evolve, and continue to be informed by new knowledge from science and opportunities identified for innovation, says Asnong.

Likewise, the process for Code development, including how the Public Comment Period is conducted, is likely to be fine-tuned and evolve over time, based on feedback from the stakeholders involved at all levels.

“Leadership in farm animal care means we must be committed to keep improving in everything we do,” he says. “This principle is integral to NFACC as an organization. It is also important for Canada as it strives toward solutions that are good for animals, workable for farmers, and help us meet the new expectations in the marketplace.”

Funding for the Codes of Practice is provided by Agriculture and Agri-Food Canada (AAFC) through the Agricultural Flexibility Fund, as part of Canada’s Economic Action Plan.

As the profile of NFACC, the Codes of Practice development, and Public Comment Periods has risen, participation has increased to a high level, says Jackie Wepruk, General Manager of NFACC. The most recent example is the Pig Code development process, during which the Public Comment Period generated over 4,700 submissions representing over 32,000 individual comments.

“This is an extremely high level relative to what we have seen with the other Codes and a major reason is the high public profile of sow housing which drew the vast majority of comments,” says Wepruk. “However this is also a very positive indication that the approach is working and people are using the opportunity available through the Public Comment Period. Having a high level of multi-stakeholder participation in all of our processes has been recognized by NFACC members as one the critical components of building a successful future of continual progress in farm animal care.”